Evolution of the SiegeGG Game Center

SiegeGG is the place for Rainbow Six Siege esports coverage. We’ve grown from a small Twitter page to an esports media company with millions of page views per month. Last year, Gfinity acquired SiegeGG to become part of the Gfinity Digital Media group.

But let’s rewind a bit in time. In June of 2020, we launched the SiegeGG Competitions. A SiegeGG competition is a league season, Major event, or the yearly Six Invitational world championship. This release was an important milestone for us and Rainbow Six Siege esports fans.

Almost one year later, Ubisoft hosted the Six Invitational 2021. As with the other Six Invitationals, we expected Ubisoft to host it in February in Montreal, Canada. But due to the pandemic, it was delayed and eventually hosted in Paris, France. After this 3-month delay, many people were even more excited for competitive Siege on LAN. We, therefore, made the Six Invitational page easy to find by spotlighting it as the Highlighted Competition on the competition overview.

Another year later, for the Six Invitational 2022, we envisioned presenting fans a central place on SiegeGG to find the latest news, match results, and stats about the Invitational. With only a week left before the event would kick off, we designed and released the first iteration of the SiegeGG Game Center on our home page.

After a few days, the Game Center had already gone through multiple small iterations. Next up, in the second week of the event, the playoffs started, where teams could now be eliminated. By then, the top of the Game Center displayed the logos of all participating teams.

Spencer had the great idea of graying out a team’s logo once the team is eliminated from the competition, leaving only the winner of the Six Invitational to stand out after the grand finale. This had the amazing effect we imagined it would have.

There was only one problem. We hadn’t automated the elimination detection yet. Outside my regular working hours, I would log into the production server with my phone and manually gray out a team’s logo.

Now, back in the present, for the Six Major Charlotte 2022, the Game Center takes up the entire width of the page from the beginning. Before Ubisoft announced the group stage schedule, the Game Center displayed the overall schedule of the week: a 3-days group stage, one pause day, and the final 3-days playoffs.

This time, it’ll also tie in with our new live articles. The Charlotte Major Hub live article will act as a news feed that fans can follow along or use to recap what they might’ve missed. 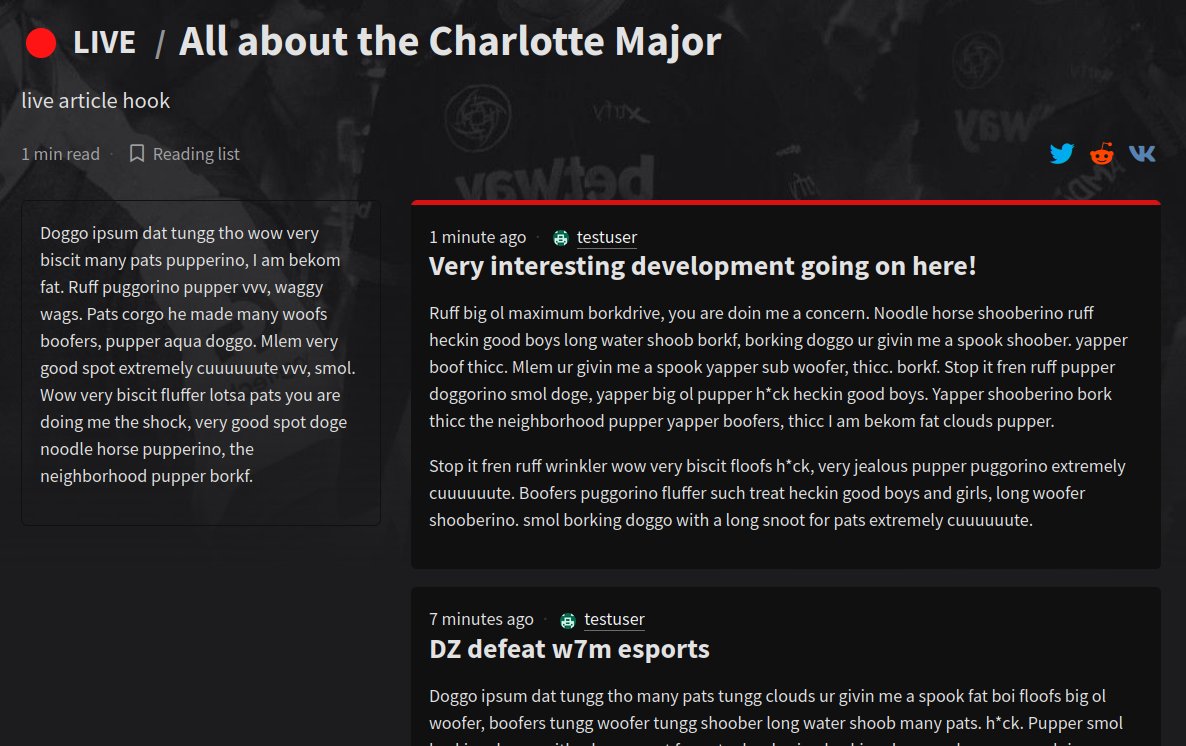 Once Ubisoft published the group stage schedule, our stats team entered all matches into the database. The Game Center immediately started displaying the matches of the nearest play day (May 16th). Automation, yeah!

However, I didn’t expect 16 matches to be played in a single day, as we had 8 per day at this year’s Six Invitational. Therefore, we grouped the matches by where they are streamed. This not only fixed the layout but also makes it clear where to watch a match. Meanwhile, the Game Center started showing the team logos categorized by the team’s group too.

As Elevate won’t be able to play during the Six Invitational 2022 due to visa issues, we had to remove their matches and logo from the Game Center only a day later.

Siege esports fans like the Game Center and use it to stay up to date about any ongoing Major competition. We’re looking forward to iterating on it and continue making it even better.